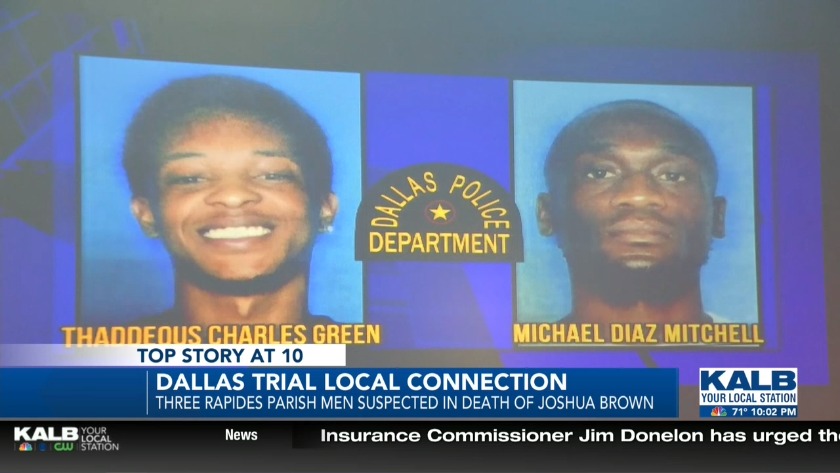 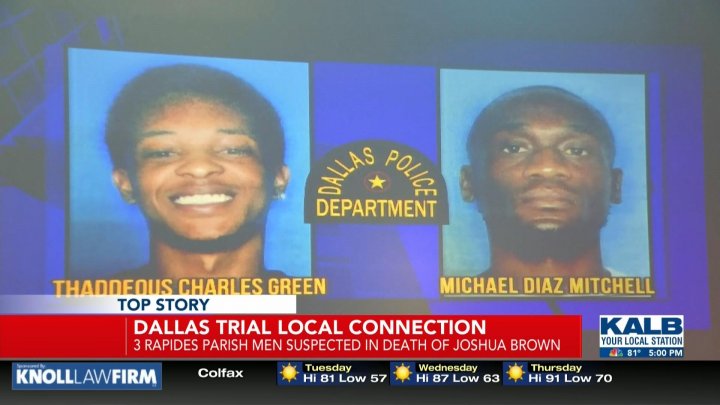 DALLAS, Texas (DPD / AP) — UPDATE: The Avoyelles Parish Sheriff’s Office has confirmed Michael Mitchell is in custody in Marksville after being found by the U.S. Marshal’s Violent Offender Task Force.

He was arrested at the Deluxe Inn Motel.

APSO said this was a local arrest for possession of schedule 1 with an intent to distribute, convicted felon in possession of a firearm, and illegal carrying of weapons.

Authorities are still on the lookout for Thaddeous Charles Green.

The Dallas Police Department is offering a reward for information that can lead to his capture.

Dallas police say three Rapides Parish men are suspected in the killing of a man who testified at the trial of a Dallas police officer who killed her upstairs neighbor.

Mitchell will be charged with capital murder.

Moore said they are from the Alexandria, Louisiana area (although court records say they are from Cheneyville) and that investigators believe they were in Dallas to buy drugs from Joshua Brown, 28.

Police said Michael Mitchell is the uncle of Jacquerious Mitchell and that Jacquerious is in a Dallas hospital in "critical condition."

Neither Michael Mitchell nor Thaddeous Green is in custody. Warrants have been issued for their arrest.

News Channel 5 ran the names through the Rapides Parish Clerk of Court's system. Thaddeous Charles Green is currently awaiting trial for burglary of a dwelling in a 2016 case. Green actually has a pretrial set in Rapides Parish for Wednesday on that case. The only other prior listed for him is from 2015 for unauthorized use of a motor vehicle. That case was dismissed.

“Thaddeous Green was the facilitator," Moore said. "He’s the one who contacted Joshua Brown. Green gets out of the vehicle, has a conversation with Joshua Brown which escalates into physical altercations.”

According to Moore, Jacquerious Mitchell said that when he exited the vehicle, Brown ordered him to get back in, then shot him in the chest. He then heard two more gun shots. Allegedly, Thaddeous Green shot Brown twice.

Michael Mitchell was the driver and allegedly dropped Green off in an unknown area then drove Jacquarious to the hospital.

CBS is reporting that police executed a search warrant at Brown’s apartment where they confiscated 12 pounds of marijuana, 143 grams of THC, cartridges and $4,000 in cash.

Brown's death Friday came two days after a jury sentenced former police Officer Amber Guyger to 10 years in prison for killing her upstairs neighbor, Botham Jean. Guyger killed Jean in September 2018 in his fourth-floor apartment, which she said she mistook for her own unit one floor below.

Brown lived on the same floor as Jean and he testified that on the night Jean was killed, he heard what sounded like "two people meeting by surprise" and then two gunshots.

At times during his testimony, Brown became emotional and used his T-shirt and tissue to wipe away tears. He said he had met Jean, a 26-year-old accountant from the Caribbean island nation of St. Lucia, for the first time earlier that day.

An attorney representing Brown’s family previously said Brown had had reservations about testifying in such a high-profile trial because he had been wounded in a shooting last year.

Attorney Lee Merritt said "a cloud of suspicion" sits over the death of Brown. Merritt said an agency other than the Dallas Police Department should investigate Brown's death so the findings will be viewed as "authentic and reliable."