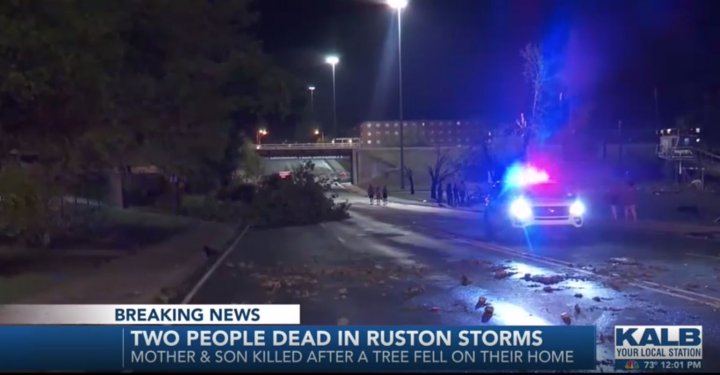 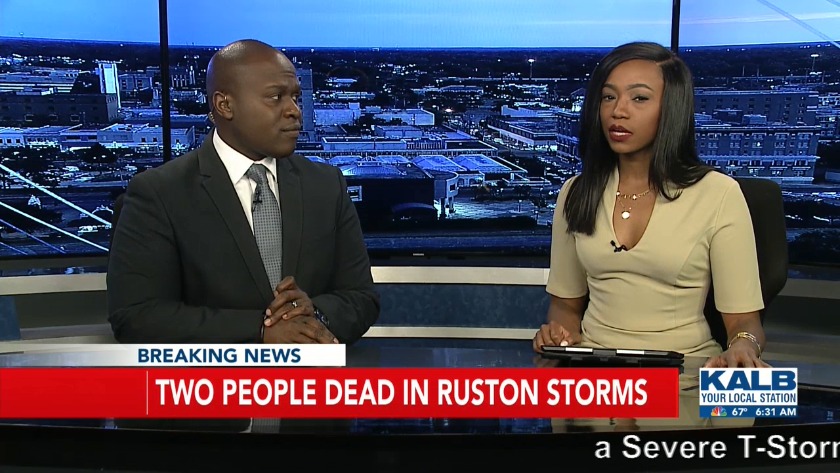 Cathy Butler identified the victims as her daughter, Kendra Butler, 34, and her grandson, Remington Butler, 14.

The Louisiana Department of Health confirmed the two fatalities. Responders say the mother and son died after a tree fell on their home in Lincoln Parish.

“We are asking the public to stay weather aware as storms continue to threaten the state,” said GOHSEP Director Jim Waskom. “We are also asking those in areas with damage to avoid traveling. Downed power lines and trees are causing many problems. It is important for emergency responders, search and rescue and utility teams to access the area. Additional people on the road could cause more delays. Listen for updates from your local media, the National Weather Service and your local emergency managers.”

The National Weather Service confirmed a tornado of minimum EF3 strength came through the area.

The National Weather Service is deploying two damage survey teams in Ruston and in Downsville in Union Parish.

Another team will be sent to San Augustine, Texas.

The Louisiana National Guard is moving Meals Ready to Eat (MRE’s), bottled water and other supplies to the region ahead of potential requests for support from local emergency managers. Guard personnel are also coordinating debris missions and other activity. Louisiana State Police, the Louisiana Department of Wildlife and Fisheries and the Louisiana State Fire Marshal’s Office are assisting with search and rescue missions and filling any law enforcement needs for the impacted region.

Louisiana Department of Transportation and Development crews are working to clean debris from roadways and repair damaged traffic signals.

A storm traveled more than 100 miles as it strengthened and weakened multiple times overnight across the ArkLaTex.

The storm exited the area leaving behind damage in multiple parishes that were placed under tornado warnings.

It then moved into Lincoln Parish where it again gained strength. The Lincoln Parish Sheriff’s Office reported the damage to multiple homes southwest of the Louisiana Tech campus. Deputies and other first responders are performing rescues at this time.

In DeSoto Parish, a tree fell on one car on Highway 175, according to the DeSoto Parish Sheriff’s Office. One person was injured.

LA Tech Les Guice advises people to stay off the roads at this time. Classes are canceled for Thursday, April 25.

A tweet by the college says no students on campus were injured. Anyone who does not live on campus is asked not to come. Employees considered essential will be asked to come to work by their supervisor.

As Troopers evaluate damage in the Ruston area, please use extreme caution as you travel in storm damaged areas. Treat downed power lines as if they were energized. If red lights are not working, they should be treated as a stop sign. Call *LSP [*577] or 911 is you need help. pic.twitter.com/sksFPqKUmQ